My second book in the Tractor Mac series was entitled “Tractor Mac Learns to Fly.”  I have read that if you’re going to write children’s books, you should write about things that you like.  I have always loved agriculture, aviation, animals, and old tractors, so that is what I write about. Although I’m not the farmer I wanted to be as a kid, I do keep some chickens and I fly big planes.  “Learns to Fly” is about being happy in your own skin, a lesson I tried to impart on my children as they grew. In the story, Tractor Mac meets Plane Jane and becomes infatuated with the idea of being able to fly, ( as she is that plane gives hayrides in the sky!)

When I brought the completed artwork for my first Tractor Mac book (“Arrives at the Farm”) to my publisher at the time (Golden Books), I presented my editor with the book idea and sketches for “Learns to Fly” too.  She immediately bought the book and thus began the Tractor Mac series.

As in the artwork for the first book, I had a great time introducing many auxiliary characters and as many feathered friends as I could.  Some “Easter eggs” were included as well. My wife, Julie’s name appeared on every page and my kids’ names made appearances in the grass, oil filters, and weathered beams of the barn.    Many of my readers know where to look for those hidden details in my books, but they may not know that “Learns to Fly” also features the Rhode Island Air National Guard squadron numbers on a coffee mug and  the logo for American Airlines on the pilot’s necktie. I was flying for both entities at the time.

The character Plane Jane was fun to develop, too.  She’s based on a Lockheed Vega aircraft, one of the last of the wooden fuselages.  It’s the type of plane Wylie Post and Amelia Earhart flew. When I was designing the character she originally had hair which, I must admit,  never looked right on a flying machine. I eventually came upon her blue flying helmet, which doubles as a canopy tarp. I think it was a good solution and works much better than a coiffed cockpit.

Plane Jane shows up in a few other Tractor Mac books, including “Parade’s Best,” “Friends on the Farm,” and the Sticker Book.  She even has her own story in “Plane Jane’s Journey,” a 6×6 inch board board book designed for my younger readers.

Tractor Mac no longer wants to be an airplane, but I think he still dreams of how fun it would be to soar above the clouds and travel to far away exotic places. 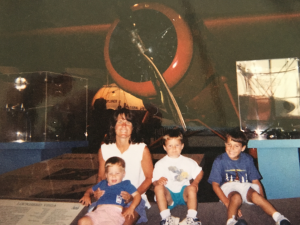 Air and Space Museum 1997 in front of a Lockheed Vega 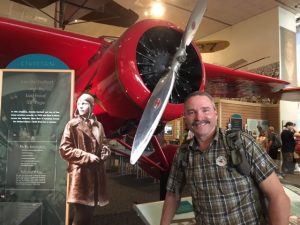