Art on The Fly

Art on the Fly 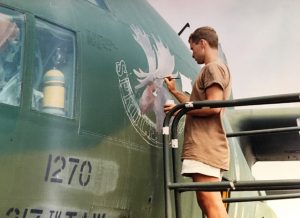 I recently came across some photos of aircraft nose art I painted on C-130 Hercules transports that I flew in my Air Force days. In my twenty-four years in the service I visited forty-two countries. Sometimes this involved flying humanitarian relief missions. Other times we were invading them. It was a tremendous experience. Because of my constant doodling on every scrap of paper and cocktail napkin, I was the guy in the squadron who was tasked to illustrate the safety posters, create pamphlets with drawings for many of our deployments, design squadron patches and tee shirts, and generally paint the squadron walls inside and out with flying scenes and the images of our squadron emblem (Screaming Eagles or Fighting ‘Rhode Island Reds,’ to be exact). One of the cooler things I got to do was paint nose art, just like the WWII aircraft sported all those years ago. It was great to see how much the crews and maintenance teams took pride in flying my creations around the world. I painted a total of twelve aircraft, enough to fill a calendar for every month. (I always thought that would make a great calendar). 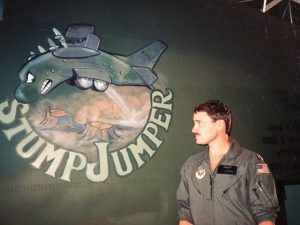 The first airplane I painted was called “Stump Jumper.” The C-130 was an amazing plane built for short field takeoff and landings. We did many dirt strip landings for practice, and in the real world. While it doesn’t really land over stumps, the Wing Commander at the time was nicknamed ‘Stump’. The artwork was completed in secrecy in a hangar and the plane was ceremoniously presented to the Colonel. I was a Second Lieutenant at the time, and I was so appreciative to be able to fly these giant planes. It was an honor and a privilege to be asked to paint them, as well. 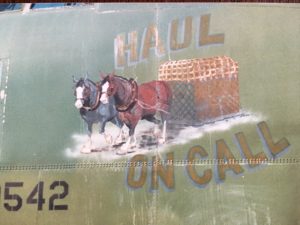 The next plane I painted was when we were on rotation to England at R.A.F. Mildenhall. The plane was called ‘Haul on Call’ and it was very popular and much photographed when it participated as a static display at an air show there. Most of the planes I painted were done during the Gulf War and Desert Storm 1 & 2. My Squadron was based in Masirah, Oman for seven months. We were the first C-130’s to arrive in theater and man did we fly our tails off. But despite the uncertainty of war and the harsh environment, there were still many memorable times. When it was determined we were to adorn our flying machines, the First Sergeant and I climbed a fence and “liberated” some cans of paint from a Navy supply locker. The nose art had to be very ‘G-rated’ and culturally sensitive due to the countries we were flying in and out of. They also had to be done in muted colors to not stand out too much on our camouflaged aircraft. (No one wanted a target painted on the side of their plane.) 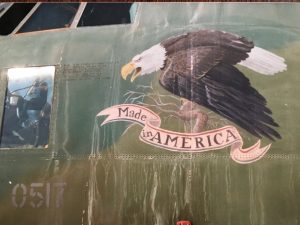 I came up with an assortment of designs and the maintenance troops competed to see which art was used. Some of the names were “The Iron Camel,” “Desert Wind,” “Sand Blaster,” and “Made In America.” 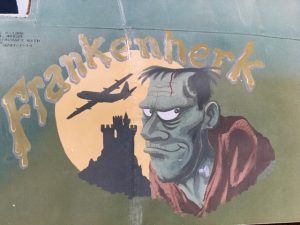 One of my favorites to paint was called ‘Franken-Herk’. Franken-Herk was an aircraft built from two different C-130s involved in separate accidents. One was wrecked on a failed three engine landing in the Azores and the other was damaged in an oxygen fire on the ground in Germany, I believe. They salvaged the front portion of one plane and bolted it to the back portion of the other aircraft. The plane had a ring of bolts running around it at the bulkhead portion behind the cockpit, hence the name Franken-Herk. The resulting aircraft always seemed to fly crooked, (out of trim), and was plagued with pressurization problems, but we all accepted that it was better to have one resurrected bolted-together airplane than to lose two.

It was really a neat opportunity to create nose art on the active duty and air guard aircraft that I flew. Many that I did were painted, some were done in chalk, but all drew smiles and photographs. As much as I’d love to create new nose art today, I don’t believe the airline company who I am employed with would let me paint nose art on a commercial Airbus A-321. At least I have the photographs and the memories.