This month marks twenty years that I have been writing and illustrating the Tractor Mac book series.  It’s been a remarkably fun and fulfilling adventure, one that has introduced me to so many wonderful people: tractor owners, farm families, and school children of all ages, plus their parents, grandparents, and extended families. The books have also paid for three college tuitions and even a few fun vacations as well over the years.

I did not start out to write and illustrate children’s books as a profession. I prefer to consider myself a compulsive doodler who likes to tell stories with my drawings. The only real art classes I had were in high school, (and I failed the art class I took in college). After graduating from the University of Utah with a BA in Geography, (I loved the cartography aspect of the degree) I joined the U.S. Air Force.  I was a C-130 transport pilot for the next 24 years, flying active duty and with the Rhode Island National Guard, eventually finishing my career serving in the Reserves. I visited forty-two different countries flying, sometimes doing humanitarian and disaster relief missions, sometimes invading them. (With bullet holes in my wings as proof.)

After I separated from active duty, I got married to a wonderful woman and started a family.  The three boys we raised always demanded more stories than the full trove of children’s books we had. So, the stories of the red tractor came to be. 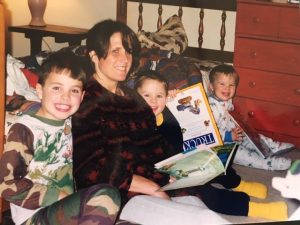 I would carry a small red diecast tractor in my pocket and if we were out to dinner or in a waiting room somewhere we would create the stories together.  It usually involved a paper placemat or pad of paper to draw backgrounds on. New characters were introduced and the personalities developed. (“Now tell me a story about the tractor and goat…or the tractor and a robot…”)

At about this time, I was fortunate enough to get a job as a contract artist with a local children’s book author and illustrator after I had tried my hands at illustrating advertisements.  The author who took me in must have seen something in my abilities with pen and ink. He taught me everything I know about book layouts, perspective drawing, and the craft of writing and illustrating an engaging story, and I am greatly indebted to him.  I worked on close to forty titles of his books for him over seven years and learned a great deal. I slowly worked out, on my own, the watercolor painting style of my ink work and the business of publishing, with my wife Julie’s support and encouragement. 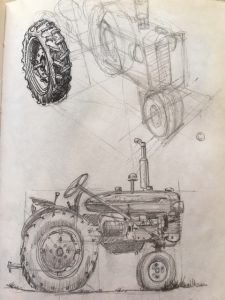 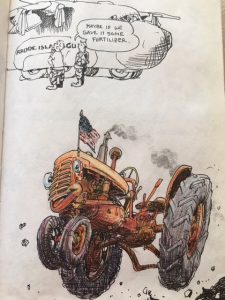 It took five years of submitting my Tractor Mac story to publishers until I got a very lucky break with Golden Books, who published Tractor Mac in 1999 (later changed to  Tractor Mac Arrives at the Farm). 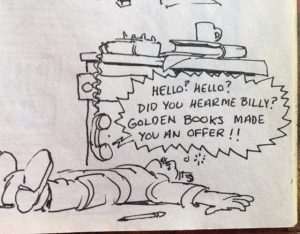 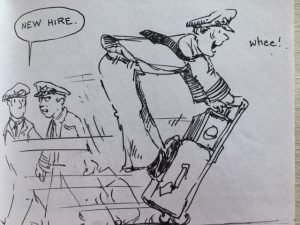 This was also the same year I got hired as a commercial airline pilot.

Since that time, we’ve had various publishers, including  my wife and I! We self published our books for ten years until Macmillan Publishing picked us up in 2015. I’ve created about one book each year, with a total of twenty-one books in the series, in a variety of formats. It’s been a tremendous experience and one that would not have happened without help from family, friends, neighbors, editors and bookbuyers, and of course the children, parents and grandparents who have brought the books home to become a favorite bedtime story. (My goal from the beginning.)

As my friend Walt Barber (who is also an actual barber),  told me from the very first book release, “Billy, in another twenty years you’ll be an overnight success “. I am very much looking forward to the next twenty years and achieving that goal.